Despite being home to 17% of the world’s population, Africa is an underinvested market and offers compelling long-term opportunities.

Africa is poised to benefit from demographic tailwinds

Africa is the second most populous continent, with around 17% of the world’s inhabitants. Based on current forecasts, its population will likely double by 2050, and it is poised to beneﬁt from the demographic tailwinds of a relatively young population.

For starters, Africa’s median age, at 19.7, is considerably lower than those of Asia and South America, at 32.0 and 32.1, respectively. Furthermore, according to the World Economic Forum, Africa is expected to have the world’s largest working-age population by 2034. This expected increase in the working-age population will likely promote middle class growth, building on trends already in place.

For example, according to the Brookings Institution, the dollar value of household consumption will have increased by nearly 50% in the 10-year period ending 2025. The International Data Corporation, an independent advisory ﬁrm focusing on information technology, telecommunications and consumer technology markets, has reported that smartphone shipments to Africa grew 13.2% year-over-year in the second quarter of 2021.

Household consumption in Africa is poised for signiﬁcant growth 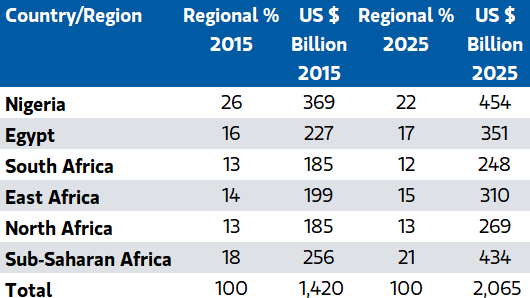 Given the continent’s projected infrastructure needs, Morgan Stanley strategists see long-term growth opportunities. For example, although Africa is home to approximately 17% of the world’s population, it accounts for only 4% of global power supply investment, according to the International Energy Association. Furthermore, according to the same agency, around 560 million people in sub-Saharan Africa will lack access to reliable electricity in 2030.

There is no question that the continent offers numerous opportunities. The Africa Development Bank estimates that Africa’s infrastructure will need at least $170 billion in annual investment. According to private market data provider Prequin, however, 72% of investors they surveyed do not currently have allocations to the continent. Africa’s infrastructure supply-demand imbalance should draw in new investment over time, as indicated by a McKinsey & Company forecast calling for its electricity demand to quadruple between 2010 and 2040.

The Chinese government and private sector have lent billions of dollars to Africa. According to the American Enterprise Institute, the continent was the recipient of $305 billion in total assistance over the nearly two-decade period ending in 2021. Notably, investment in energy, transportation and metals dominated the project pipeline.

According to China’s State Council Information Ofﬁce, China has helped African countries build and upgrade 10,000 kilometres of railways, tens of thousands of kilometres of highways and transmission lines, 80 large-scale power facilities and 130 medical facilities, and trained more than 160,000 personnel. Furthermore, senior researchers at the South African Institute of International Affairs, say tech giant Huawei has constructed 70% of Africa’s 4G networks and most recently launched the ﬁrst 5G networks in South Africa and Kenya.

Looking at investment in Africa beyond China

Several policies designed to lower the hurdle for doing business on the continent are in place. The US government’s Prosper Africa initiative intends to increase trade and investment between African nations and the US. According to the organisation coordinating its activities, the initiative has already led to over 800 investments and $50 billion in exports and investments in 45 of the continent’s 54 countries. Among other things, it should help reinvigorate the US’s trade relationship with Africa.

The European Union has also launched its own development initiative, Global Gateway. Global Gateway aims to raise €300 billion of investment in digital, climate and energy, transportation, health care, and education and research by 2027. Morgan Stanley strategists would not be surprised if global infrastructure investment were addressed at the sixth European Union-African Union summit next month.

Finally, Jan. 1, 2021 marked the ﬁrst day African countries opened their markets under the African Continental Free Trade Agreement (AfCFTA). AfCFTA drops 90% of tariffs and aims to eliminate barriers to imports and exports between participants. While its scope is wide, it will help limit cross-border conﬂicts and generate economic growth.

The UN anticipates that Africa’s aggregate GDP will expand by 3.6% in 2021. In fact, although the continent has been hit particularly hard by the global pandemic, Morgan Stanley economists expect per capita income to recover to pre-crisis levels by 2024 and are encouraged by the healthy rebound from 2020’s doldrums.

Note: 2021 and 2022 are estimates. 2022 is not available for Ethiopia. Source: International Monetary Fund, Morgan Stanley Wealth Management Global Investment Ofﬁce as of Oct. 21, 2021.

Opportunities for investors willing to work through challenges

Sustained development in Africa faces many challenges. Infrastructure projects are notoriously difficult to get off the ground, with 80% failing at the feasibility and business plan stage, according to McKinsey & Company, and African nations routinely populate the bottom quartile of the World Bank’s Ease of Doing Business ranking.

In spite of these challenges, the continent has already started on the road to recovery.

26% of fund managers surveyed by Prequin said that Africa will present one of the best regional investment opportunities. Morgan Stanley Research sees opportunities for qualiﬁed investors to make allocations to the region’s infrastructure through private investments or public companies that stand to beneﬁt from stronger and more sustainable consumption. Morgan Stanley analysts say investors interested in private market opportunities should focus on Nigeria, Kenya, Egypt, South Africa and Ghana, which captured over 80% of venture capital funding in 2020, according to Partech, a San Francisco-based global venture capital ﬁrm. Why Portfolio Construction Could Get Tougher

The latest run-up in interest rates may not be as fleeting as some investors think. What it could mean for portfolios. Morgan Stanley strategists say the easy returns are over for U.S. equities, credits and Treasuries, but see value in European and Japanese stocks in 2022.