The Budget on 29 March will be a key lead-in to the Election in May. Morgan Stanley strategists expect deficits to reduce alongside targeted cost of living announcements.

After an eventful start to the year, Morgan Stanley strategists think the focus on fiscal policy will return over coming weeks as the Federal Budget on March 29 will lead into a formal start of the election campaign, which must be held by 21 May. The Government is currently trailing in the polls and while these usually narrow as the election draws closer – they will certainly sharpen the focus of the Budget as a pre-Election pitch.

Morgan Stanley strategists expect significant revenue tailwinds in the Budget, both from upgrades to economic forecasts (particularly inflation and wages) as well as the mark-to-market upgrade of commodity prices (although conservative forecasts will likely still be kept). This allows for a pre-election spending package focused on cost-of-living measures.

In Morgan Stanley’s December deep-dive into the election outlook (Election 2022: Fiscal's First Test, 14 Dec 2021), strategists flagged a backdrop that was expected to show a supportive fiscal setting and less policy divergence than the prior election. Broadly, our strategists think this still holds.

However, since December, the clear macro development has been the continued heightening of inflationary pressures in Australia and consequently the expectation for rates to rise much earlier than was previously expected. This has important implications for the fiscal narrative as we move into the election. In our strategist’s view, it limits the size of spending that either political party will feel comfortable proposing, as this could be construed as risking overheating the economy and seeing rates rise faster and earlier. Therefore, while spending measures are still likely to feature through the election lead-up, our strategists believe they are likely to be smaller and more targeted than they would have otherwise been.

The other aspect of inflationary pressure is the increased focus on cost of living, given the increase in spending that households are having to allocate towards food and fuel in particular. Our strategists expect this will see cost of living dominate as a key policy issue in the election campaign, which may crowd out some of the focus on other, more peripheral issues. On the other hand, the commodity price shock is a clear revenue benefit for the Government and will boost its company tax take – we expect this will further incentivise the Government to pass some of this benefit back to households.

The Budget will likely set the stage for a more formal start to the election campaign, with both sides providing more clarity on their election platforms. Importantly, our strategists think the risk of substantial policy change from either party is quite low, and expect much less divergence in policy direction relative to the last election in 2019. This should reduce the scope for the election outcome being a significant market event like in 2019 – at least as it relates to which party forms government. However, we do think the emergence of inflationary pressures over recent months will limit how active fiscal policy will be under either party, and so we may see a return to support that is reactive, rather than proactive to any growth slowdown.

Where there may be some potential risk, is if neither major party is able to form government by itself. The vote share of minor parties and independents has steadily increased over the past 40 years, which increases the likelihood of a minority government having to be formed, particularly if polling results tighten into the election. While not necessarily a risk outcome by itself, a minority government (depending on its composition and number of parties) could be a headwind to the macro-outlook – to the extent that it makes more active fiscal policy difficult to pass.

Exhibit 1: We expect upgraded economic forecasts and higher commodity prices will see deficits reduce at the Federal Budget on March 29 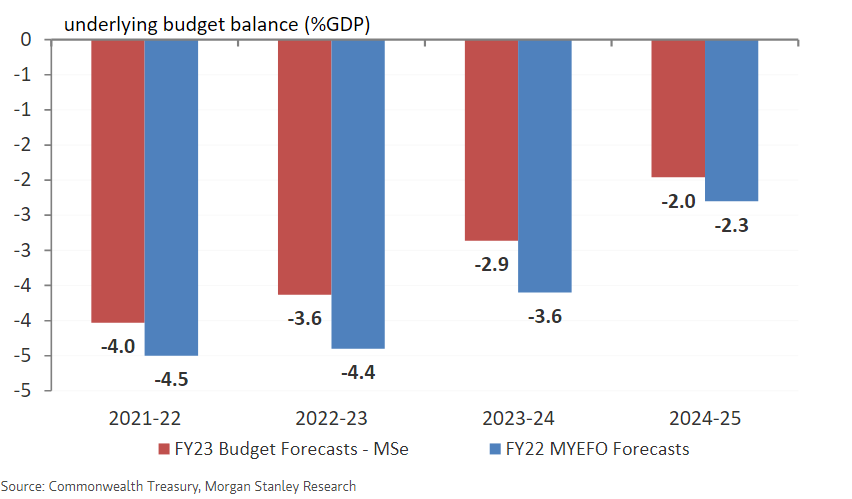 For more on the market implications of the Budget, speak to your Morgan Stanley financial adviser or representative. Plus, more Ideas from Morgan Stanley's thought leaders. 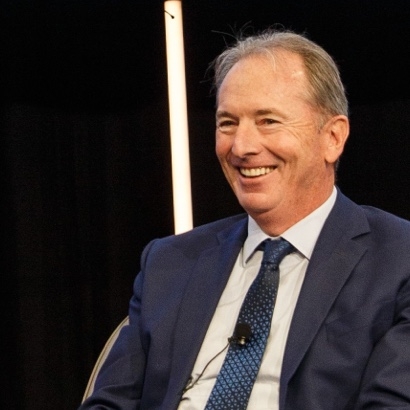 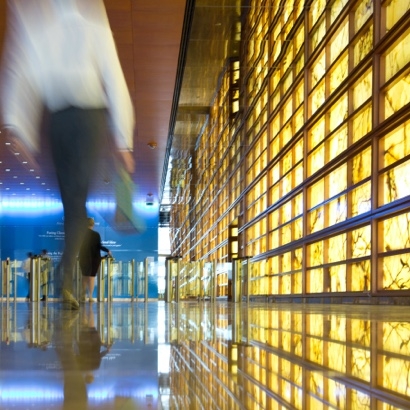