Morgan Stanley Research has revised its assumptions on the timing of the normalisation of US economic activity. After a 38% annualised drop in growth in the second quarter, a shallower rebound in the third quarter is predicted, with activity returning to its pre-virus level at the end of 2021.

The Great COVID-19 Recession is taking an increasingly greater toll on the US economy, as disruptions to economic activity have become increasingly pervasive and as social distancing measures and closures of nonessential businesses have spread to an increasing number of states.

Morgan Stanley economists now predict the gross domestic product (GDP) of the first quarter in 2020 to drop by 3.4% as economic activity came to a near standstill in March, followed by a record-breaking drop of 38% in the second quarter.

The evolution of economic activity thereafter will be a function of how quickly the number of coronavirus cases peaks, how quickly social distancing measures are rolled back and how quickly consumer and business sentiment recovers.

With this dynamic in place, Morgan Stanley Research expects the US economic recovery will be more drawn out than previously anticipated, marked by a deeper drop into recession and slower climb out. Morgan Stanley Research has revised down expectations for the third quarter GDP growth accordingly, and is now predicting a 20.7% annualised bounce in GDP in the third quarter. Although that looks like an elevated quarterly growth number, off such a low base, the forecast implies that the level of real GDP in the third quarter will recover only 35% of the output lost in the first half of the year. Job losses are mounting in the US

Disruptions to economic activity and closures of nonessential businesses have increasingly weighed on the labour market. In the past two weeks alone, nearly 10 million workers filed for unemployment benefits, indicating that upcoming employment data on payroll growth in April and through the second quarter is likely to be deeply negative. 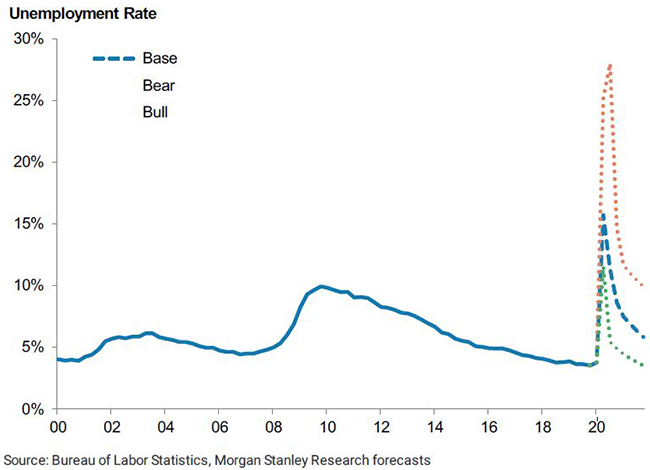 Fiscal policy will complement monetary policy, which has dropped rates to zero and policymakers are likely to leave rates there for an extended period of time.

Morgan Stanley Research’s recently revised inflation forecasts see the core Personal Consumption Expenditures (PCE) inflation falling to just 1.2% year on year in the fourth quarter of 2020 and rising only to 1.8% year on year at the end of 2021. A low inflation backdrop and an economic recovery that is still underway in 2021 are likely to reinforce policy at the zero lower bound over that horizon as well. Falling demand and disrupted supply chains will trigger a global economic recession. However, strong monetary and fiscal policy responses under way could set the stage for a second-half rebound. It is important to remember during periods of heightened volatility that investors stay within their targeted asset allocation ranges. While black swan events are, by definition, difficult to predict in advance, they nonetheless present important portfolio positioning implications when they arise.