Autos: Critical to manufacturing and employment

Any slowdown in the industry is likely to have significant global economic ramifications. Automobiles are a key part of the manufacturing sector in a number of countries. In 2017, the global industry directly employed roughly eight million people, and indirect employment, such as automobile components, is estimated to be between 4.3 times in the U.S., and 6.2 times in Japan, that of direct employment.1 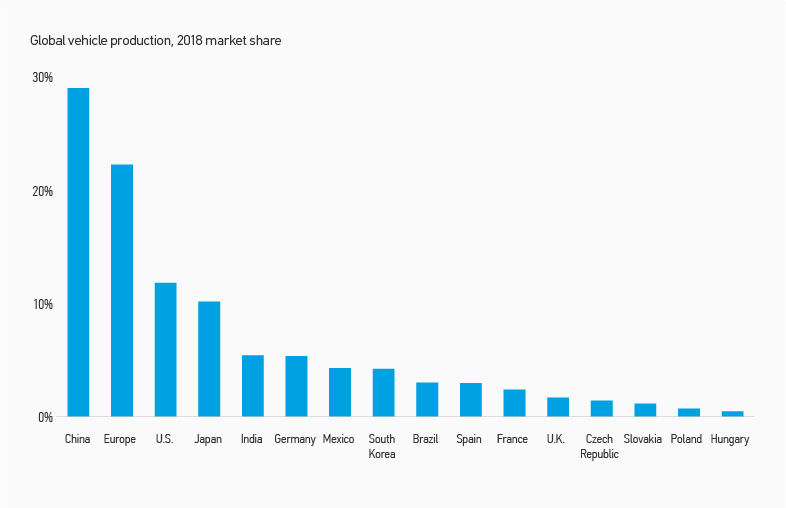 On the skids: Global car demand

China, which makes up almost 30% of global passenger car demand, saw vehicle registrations contract by over 4% year-over-year (YoY) in 2018, the first decline since the 1990s.2 Given weakening Chinese economic growth, elevated uncertainty and softening employment growth, it is not surprising that fewer consumers are purchasing a new car. The EU, which employs nearly 14 million people in the auto sector, felt a similar drop. 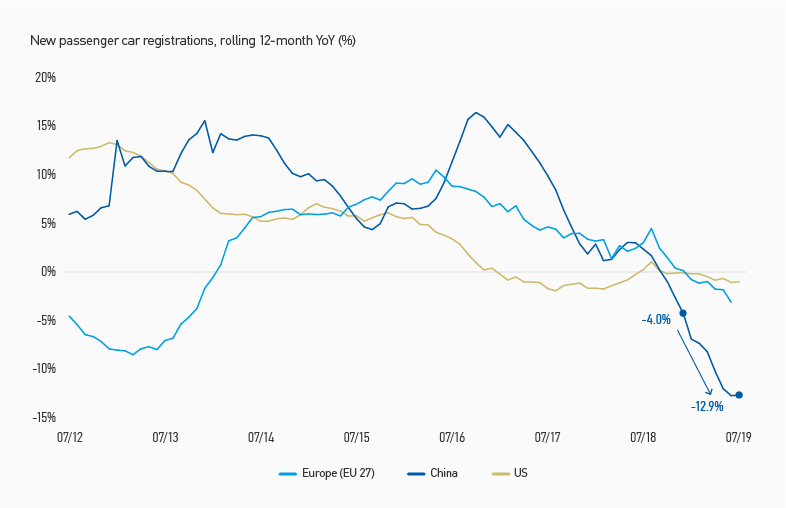 The production of global passenger cars has also dropped, falling 3.2% in 2018—the first contraction since the financial crisis in 2008.3 This is especially striking in China and Germany, where production is down 15% YoY in both economies. Both domestic demand and exports are suffering and the trend does not appear to be linked to a recession or the trade war between the U.S. and China. 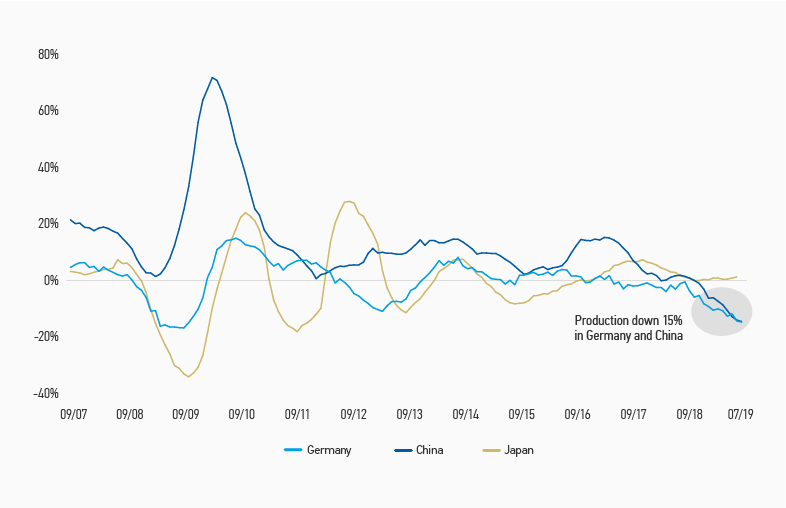 Much of this global decline seems to be driven by increasingly strict governmental policies regulating the internal combustion engine (ICE).

The EU, for example, has set targets to cut passenger car CO2 emissions from 130g/km to 95g/km by 2030. If an auto manufacturer’s fleet has average CO2 emissions exceeding its yearly target, for each car registered they are fined €95 per g/km of excess emissions.4

Some countries have gone as far as instituting 100% zero-emission vehicle targets.5 Norway has been the most aggressive with a planned ban on ICE-sales by 2025, and six countries are expected to follow suit by 2030.6

All major car manufacturers have made clear commitments towards electric vehicles (EVs) as a way of addressing this new policy landscape. However, debilitating up-front costs are slowing the transition.

Path forward will be a slow U-turn

In the longer term, we expect demand to pick up. Disruptive trends like car sharing have made car ownership somewhat less important, but they have not yet upset the norms. The industry’s rough downhill road over the past 18 months is expected to eventually evolve into an upward growth trajectory.

The employment repercussions are a different story. EV manufacturing tends to be automated, requiring significantly fewer workers and the assembly-line skills needed for building ICE cars are not readily transferable to producing EVs. Auto manufacturers are likely to adapt, but it is smaller companies and employees in the ICE vehicle supply chain which may suffer, given EVs require fewer parts. Longer term, economic growth will result in employment growth, but the magnitude of this employment growth is unclear.

Looking at the global regions, we see near-term challenges:

Stay off the highway, for now

The auto industry is going through a disruptive pivot. Despite hurdles, countries aiming for zero emissions by 2025 will require significant investments quite soon. Morgan Stanley expects to start seeing these investments and their effects kick in within the next two years. The trip to growth is likely to be a long one. In the short run—and until prices drop further—investors should be cautious with investing in the auto industry.

For more on the future of the auto industry, speak to your Morgan Stanley financial adviser or representative. Plus, more Ideas from Morgan Stanley's thought leaders.