The US may be in the middle of what could be a 20-year secular bull market for equities that began in 2011.

Morgan Stanley acknowledges a recession in the near term, believing markets are in the midst of a cyclical consolidation. However in the longer term, it is likely the US is still in the middle of what could be a 20-year secular bull market for equities that began in 2011. 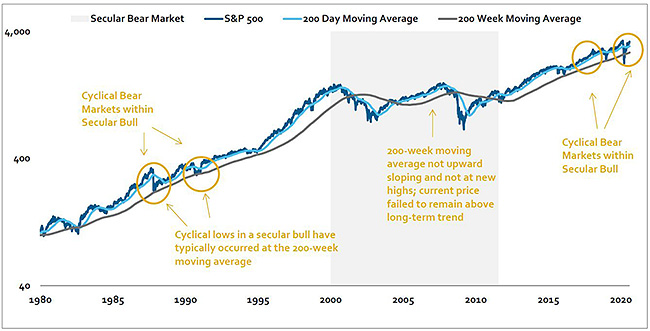 While cyclical bear markets and economic recessions can occur within secular bull markets, the magnitude or length of such pullbacks has been much less severe in secular bulls versus secular bears. As a result, Morgan Stanley does not believe the current cyclical downturn will be as prolonged as those seen in 2000 and 2007, from either a market or economic perspective, as those downturns occurred during a secular bear market.

Over the past century, US equities have progressed through five long-term, or secular, market phases. Morgan Stanley believes US equities are in the midst of a sixth phase, a secular bull market that began with the recovery from the Great Recession in 2011.

Each secular period has been characterised by a paradigm shift, which has been driven by a combination of demographic shifts, technology innovations, and significant regulatory or monetary policy regime changes.

Powering the next phase of the secular bull market

The second phase, which is beginning now, will likely be powered by:

Despite the potential headwinds Morgan Stanley sees for portfolios in the next 12-24 months, investors should keep in mind the context of the secular bull.

Cyclical bear markets and recessions can occur during secular bull markets, but they are less likely to be the prolonged financial and economic calamities that characterised 2001 and 2008. Prudent risk management and planning is important, but investors should be wary of overreacting to market events, especially those with long time horizons.

For more on the secular bull market, speak to your Morgan Stanley financial adviser or representative. Plus, more Ideas from Morgan Stanley's thought leaders.